CelebrateDecorMaterialSeasons
Home
Sign Up
By Katja Kromann
Submit a Craft

This was one of my first tutorials when I first began sharing my projects online in 2012. While the images are from then, my tutorial never looked like this before. I have completely revamped this tutorial to make it easier to follow.

These napkin rings are still one of my favorite projects and I can't wait to re-share it with you here on my new craft website.

Here is the napkin ring I want to show you how to make. Suspended in mid-air.

Here is how I made that photo (click camera) 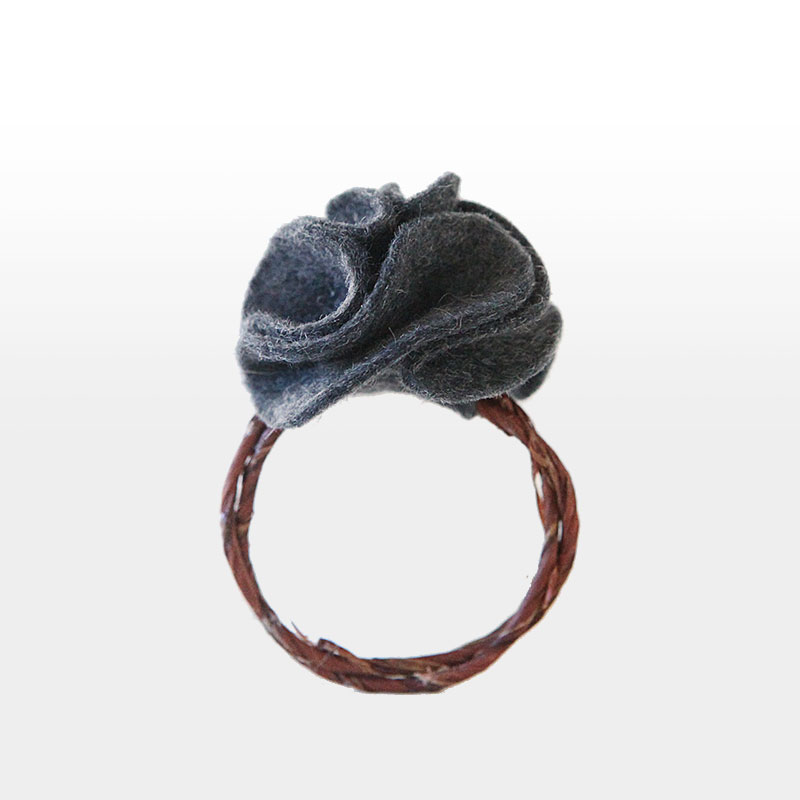 First I made a lot of felt circles.

I used a shot glass to trace my circles onto some dark gray heavy weight felt. I made 8 napkin rings. You need 5 circles for each ring, so I made 40. 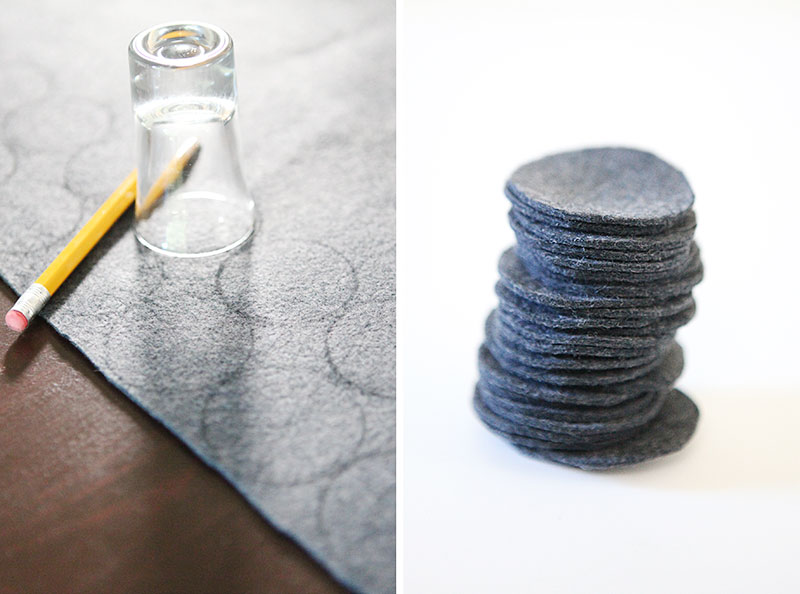 I used one of those glue guns that don't get really hot. Still pretty warm though. I placed a bead of glue into the center of each circle and folded it in half, then used a clothes pin to hold the felt in place while it dried. 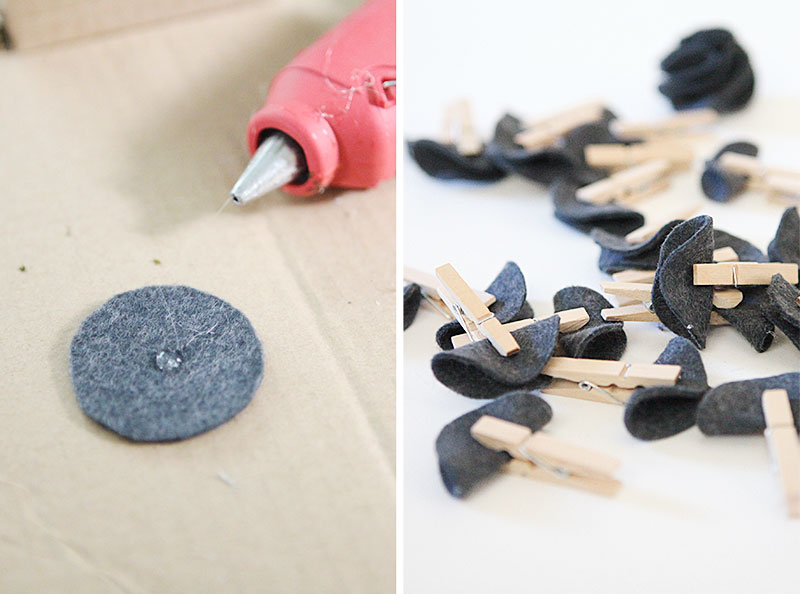 For the centers of each flower, I folded 8 of the half circles into quarters after that. Again securing with a dot of glue in the center and holding it with a clothes pin until it dried. Ok, as you can see, I made way more than 8. I was on a roll. 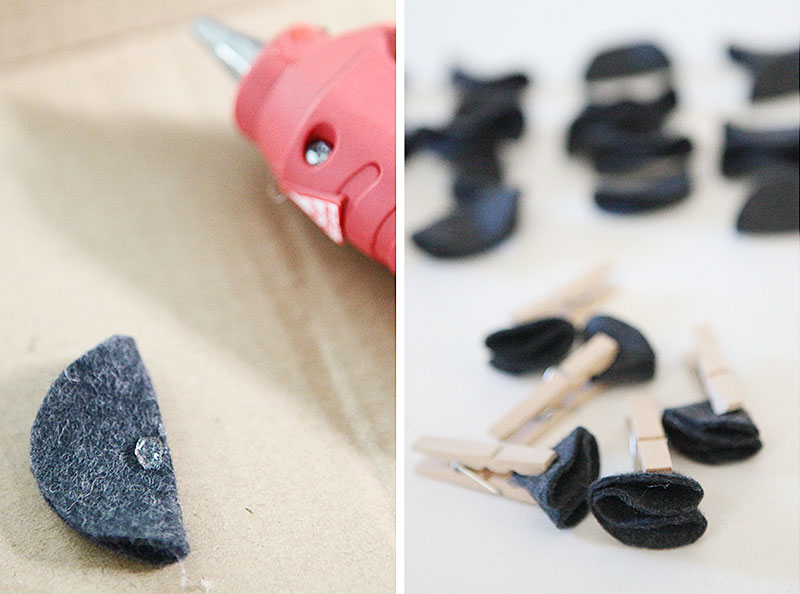 Using 4 half circles, I layered them on top of each other, while adding a dot of clue to the center of each one.

They are layered in a thatched sort of way. The fourth half circle is lifted over the first one when you come all the way around. 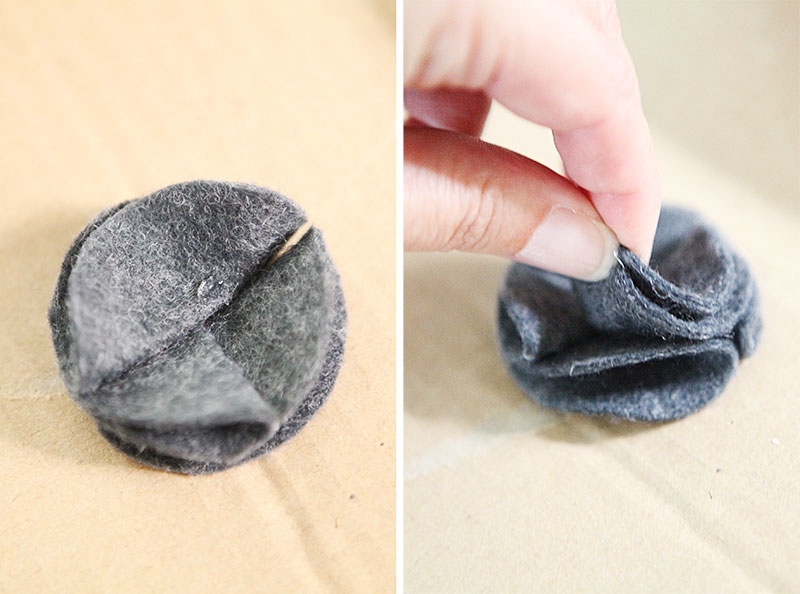 No you have the base of the flower. Lift up the petals while the glue is still pliable and give the flower some dimension. 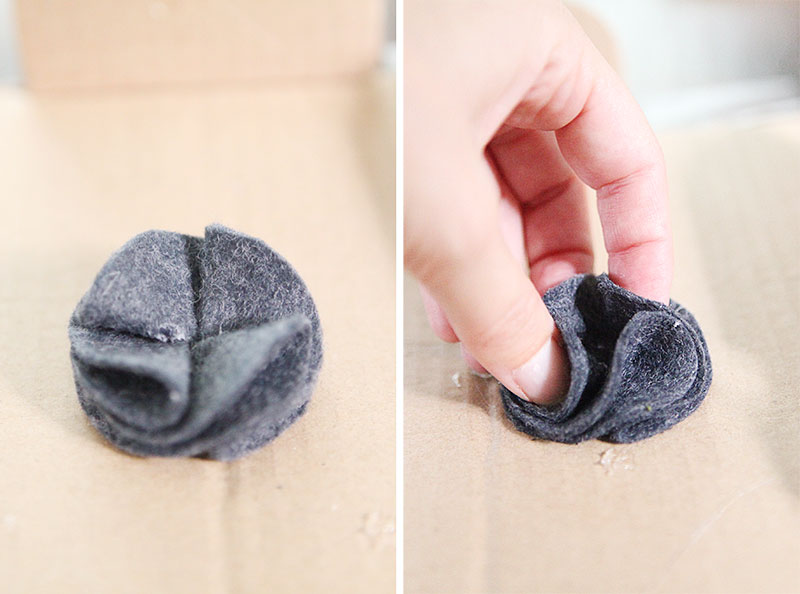 Finally, place one of the centers into the middle of the flower. The center is the one of the pieces that was folded in quarters. 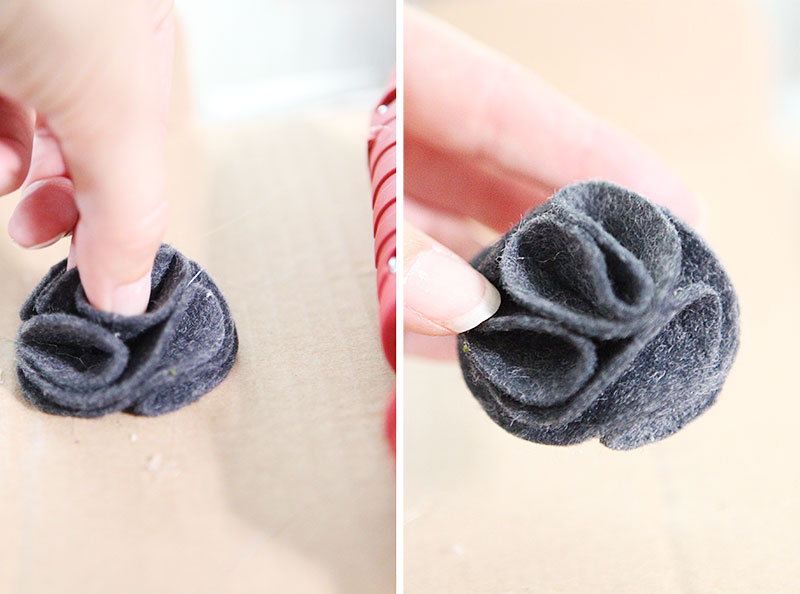 Next I made some rings for the napkins. I used Naturally Wired Wire and wrapped it around the shot glass to shape it. This shot glass is really becoming an integral craft tool in this tutorial. Then I made 2 inch diameter rings, doubling the wire and twisting it around itself. 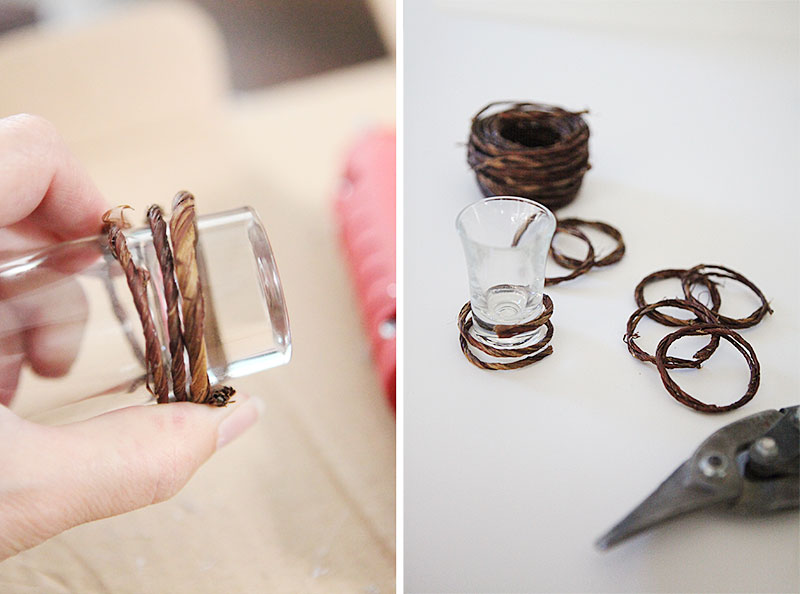 I glued the rings to the back of each flower. 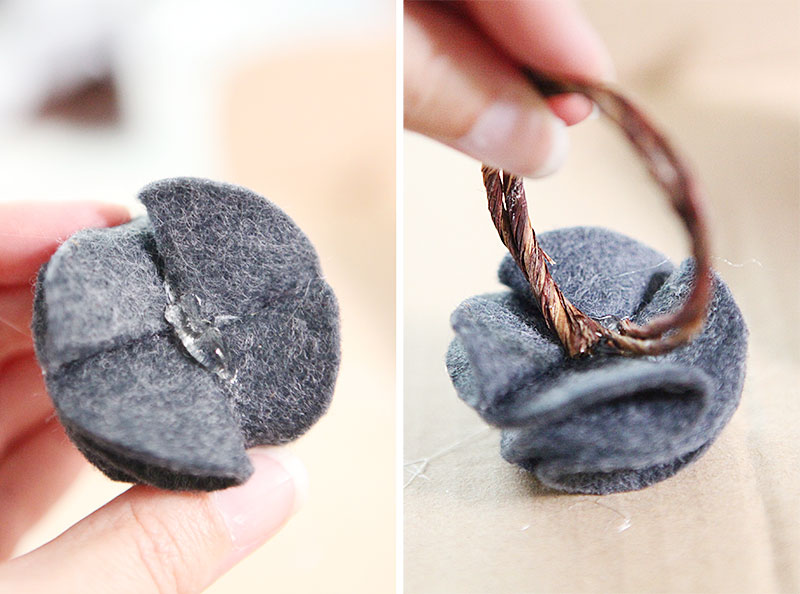 Then I made 8 smaller circles using a quarter for tracing. I put those over the rings on the back. I think they make for a nice finished look and hides where the wire is cut. 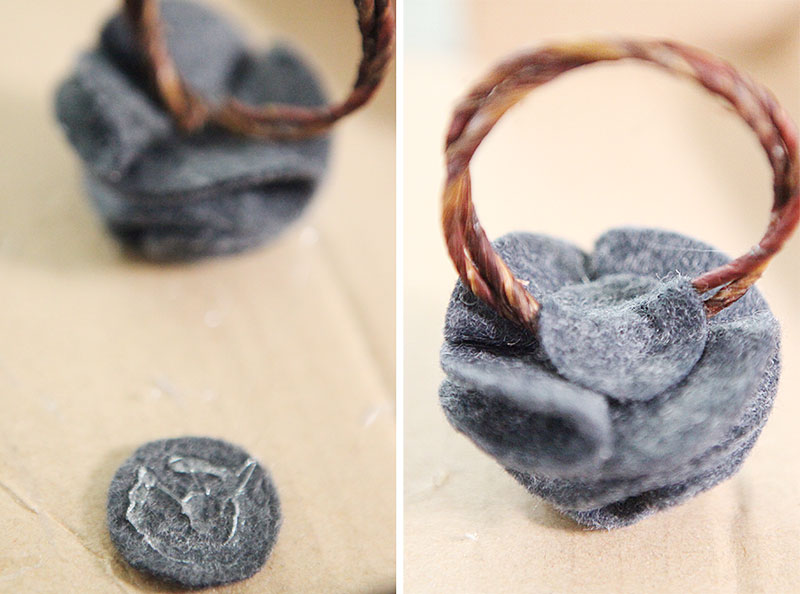 And there you have it. The finished felt flower napkin ring.

Here I am using it with a simple white napkin and some leaves from the back yard. 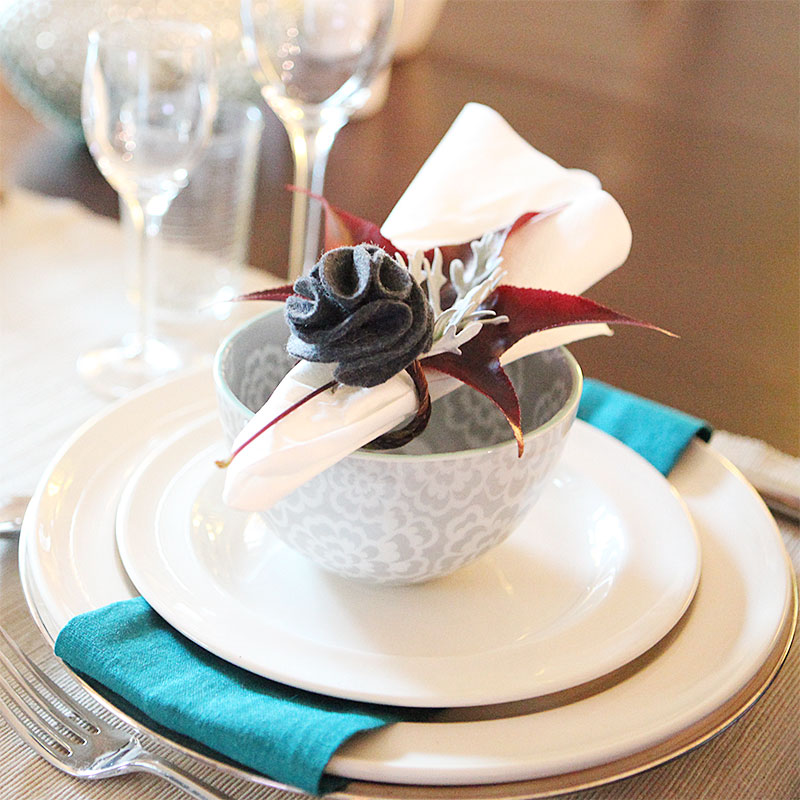 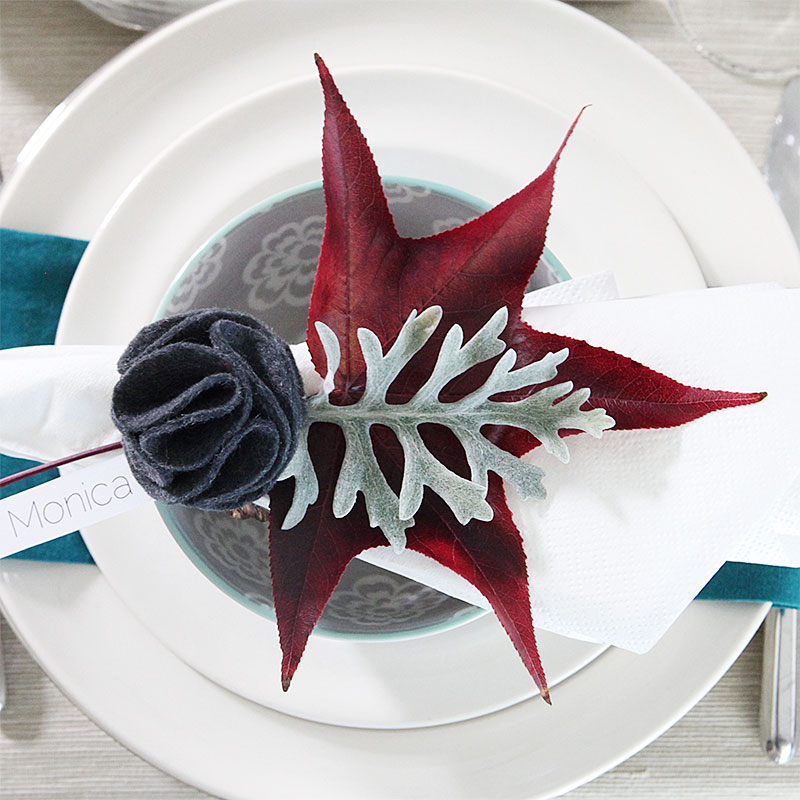 I loved this felt flower so much I turned it into an ornament.

Posted by Katja Kromann
Some blog posts contain affiliate links to products I use. More information
This article: Felt flower napkin ring first appeared on http://ahomeforfood.com.
You might also be interested in these posts
Visit the other sites too
Design Food Crafts
Get Crafts to Your Inbox
When you subscribe here, you will receive an email every time I post about a new craft. Definitely worth it.
Subscribe here
Follow
​Instagram
​Pinterest
About A Home For Crafts
I love hand made. Home made. Crafting. Fiddling. Paper cuts - no, not that kind. But wait, there is more.
HomeAboutContact
A home for crafts © 2021 / All rights reserved